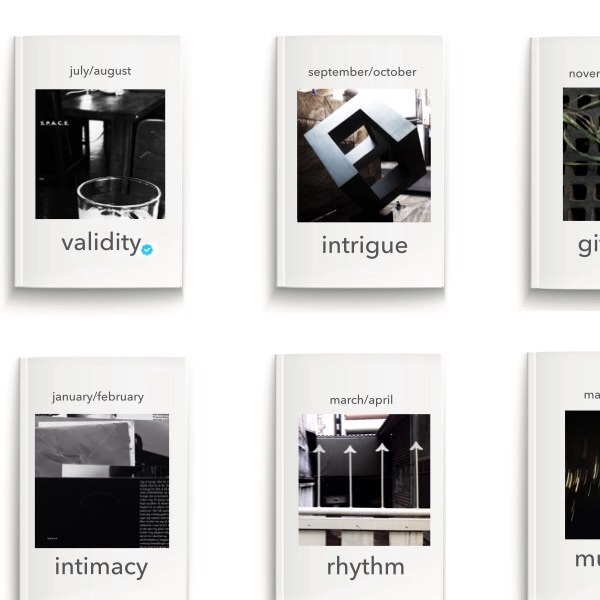 Even if these are academic people, art critics, or, gaw, the Art World, (sets whom, normally, I would avoid conversing with because I never thought that what I’m into would be what they would see as artistic), even if then. I’m listening. Why? Because I’ve been wrong. There are others who have already been on this path. Which means there are signposts, if only I know where to look. In other words, the feeling is like this: Wow. It’s not that they thought it’s not artsy. They actually think it IS artsy. They’ve even named it. That means, it’s a thing.

DISCOVERY. Because I studied math, physics, and applied math and physics, I didn’t even know about this stuff. No one starts in on making anything by following a prescription, though–it’s not like I said, in the 1990s, ‘I’m going to make relational art.’ That would be stupid. I just sort of bumbled my way towards something that a lot of other people also stumbled upon, and that means, there is more than just one of us. That means, we are something. dada. Surreal. You can call it something like that. Or… you could just enjoy knowing there are now whole volumes of things to learn about, things that those before you (who you can feel some resonance with) have done, seen, thought, written, drawn, painted, created, installed, and more.

AT DK, AND OUTSIDE of it, what I make is relational art. Read this post about interstitial space that might give you a feeling of what that feels like, in writing. This is newish, I’m gathering, from my limited conversations with new people who study art and so on. New is hard for people to get into. And mostly, sadly, I’ve noticed, many people are afraid of the new. There’s even a word for it. Fear of the new. ‘Misoneism.’ But this really gets in the way of innovation. 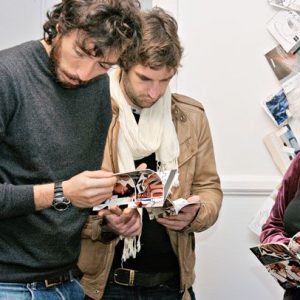 INVITING THE NEW. I care about new things. New input. New people. Part of DK’s goal with our new relational approach is to get in the face of that fear, and introduce people to others who are
(seemingly, but not really that) different, and meet up, in real life, and just connect.

It’s invigorating and feels great to see that there exists a philosophy of this kind of art, which means I can amplify the effort to move the dial in the direction that I feel is the best one for us. It’s been written about. People nod. That foundation has been lain. So much of the work has already been done.

So, DK are morphing from a design consulting studio into something more… arty. I didn’t mean for this to happen. But it has. Just looking back on things and reflecting, I see the pattern. If you check out DK’s projects in S P A C E that have been going on since 2014, you’ll see what I mean. Before S P A C E started, we were a design boutique. Straight up, clean lines, modern aesthetic, quality workflow, nothing got out of hand and we had a lot of happy clients. But now it’s… kinda different. Now we’re into stuff like conversation spacemaking. Salons. Ateliers. Gatherings. Workshops that get us all out of our boxes, mixing, discovering, and meeting others whose paths we might not have crossed, like, ‘16N‘ and similar. Oh, yeah. Speaking of that. ‘N’, and describing it to people, and sharing about what our studio was trying to do with it, that story I shared casually and randomly with two art students at a table next to me in Aarhus in a wintry streetlit cafe. They taught me.

Context and relevance: ‘What you guys are doing is relational art’

RELATIONAL AESTHETICS. The subject came up for me for the first time when some art school students in Denmark said, ‘You’re getting strangers together for salons to talk about themed topics? Around the world? That sounds like relational aesthetics.’

‘Relational art or relational aesthetics is a mode or tendency art practice originally highlighted by French art critic Nicolas Bourriaud. According to Bourriaud, relational art encompasses “a set of artistic practices which take as their theoretical and practical point of departure the whole of human relations and their social context, rather than an independent and private space.” The artist can be more accurately viewed as the “catalyst” in relational art, rather than being at the centre… The artwork creates a social environment in which people come together to participate in a shared activity. Bourriaud claims “the role of artworks is no longer to form imaginary and utopian realities, but to actually be ways of living and models of action within the existing real, whatever scale chosen by the artist.”… In relational art, the audience is envisaged as a community. Rather than the artwork being an encounter between a viewer and an object, relational art produces encounters between people. Through these encounters, meaning is elaborated collectively, rather than in the space of individual consumption.’

Designing space to share real life with new and different others

Well! So there are others, too, who want it to be about the party and not the artist!

The inkling of this being more interesting came to me for the first time when I was hosting the opening reception for the show, ‘Today I Love You.’ It was a solo show and happened in Durham NC USA in 2012 over the Valentine’s Day weekend. Why not? I got into it and made more than 100 pieces, all brand new. But those weren’t as interesting as the people who came: the chocolates and the champagnes, the conversations, the interplay between the people I never met and the ones I’d known for half my life. North Carolina, after all, is one of my homes. JL surprised me by showing up which was brilliant, as he was an early mentor. Then there was KEF. And pictures by the talented JD. And a visit from the younger RK. There was AM and BW, pictured, too.

Others, including SR, a videographer I had only met recently but who has a fantastic energy and whose tireless enthusiasm and collaborative bent really inspire me. I remember being super happy, seeing all these wonderful people together in one place. Kind of like other shows, in Seattle, or the conversation spaces, in other places in the world. I’m thinking of ‘BEAUTY’ in Phnom Penh. Of ‘Hello August’ in that same town.

Of so many, many moments where new and different others could find remarkable connexion.

That is after all what DK now exists to do. DK design that particular kind of S P A C E. Remarkable.

I love the space that gets made when people are connecting, interacting. Interconnecting. With the zines or art books, or reading something I’ve written, or looking at a piece, but what’s more interesting is the conversations that open as a result. So the pieces are just prompts, now.

They’re not the pieces of Art, to me. The people are; not just as individuals but in the collection of being there, together.

Sharing a moment. Making a space. 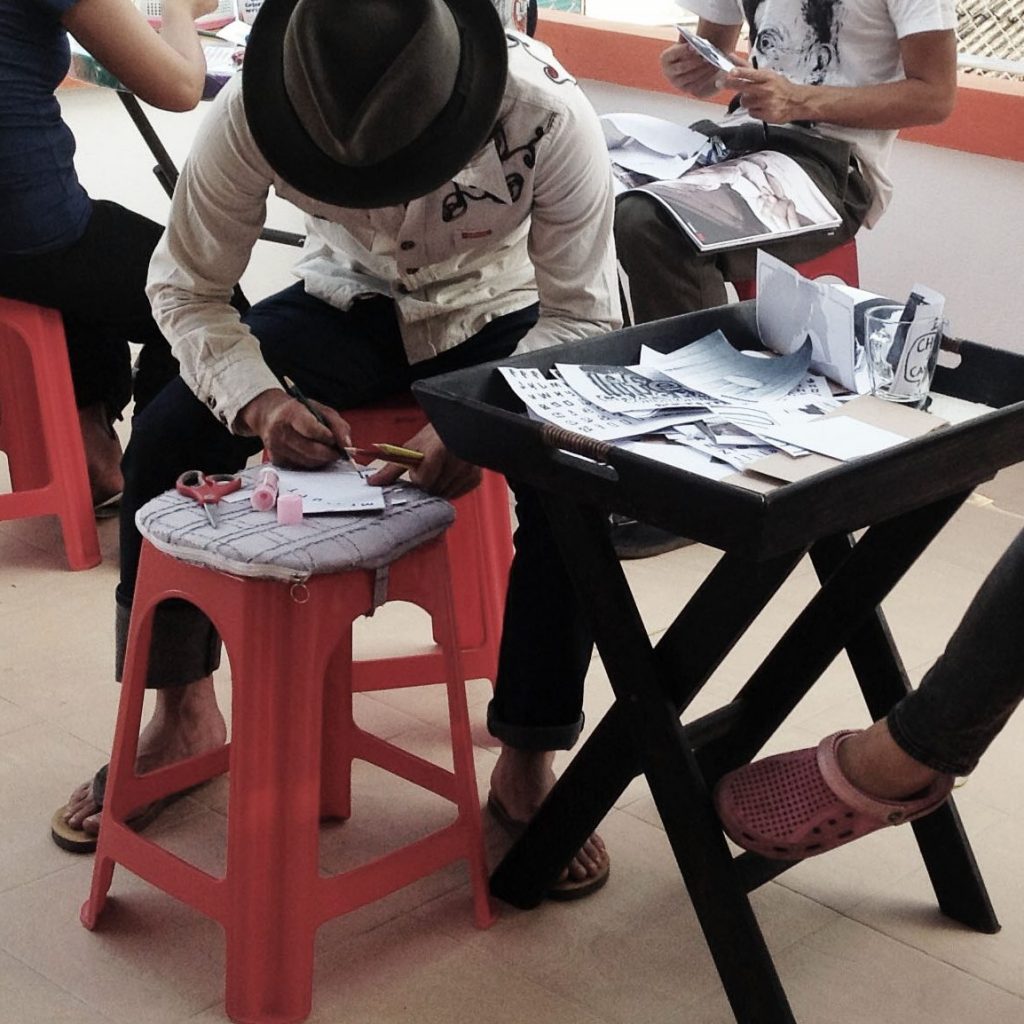 A SHARED MOMENT. A once-only experience.

In case you were wondering, this relational approach and the interest in finding the beauty of interconnectivity, and interplay between new and different others whose paths might not have otherwise have crossed, is why I am helping design our studio’s 2018 suite of ateliers. If you have been in touch with DK, or want to try something new with us this year, this is a good time to give it a go. Something new. Something fresh. And then towards the fall we’ll turn away from the online salons and get back to making what we make best: zines.

Meet us in S P A C E? See what’s on tap, including the new journaling x photography salon, ‘Slow Moment, at this page with all our upcomings. 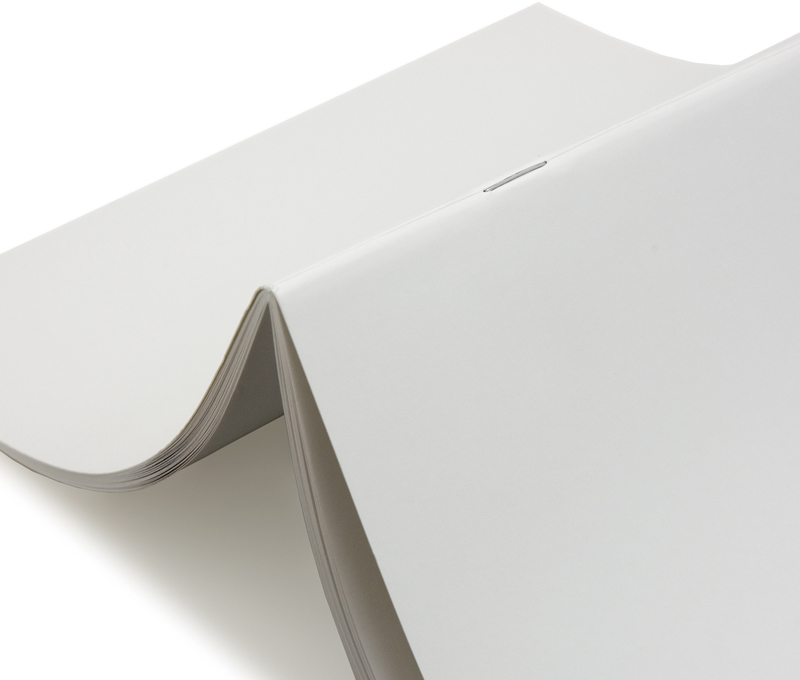 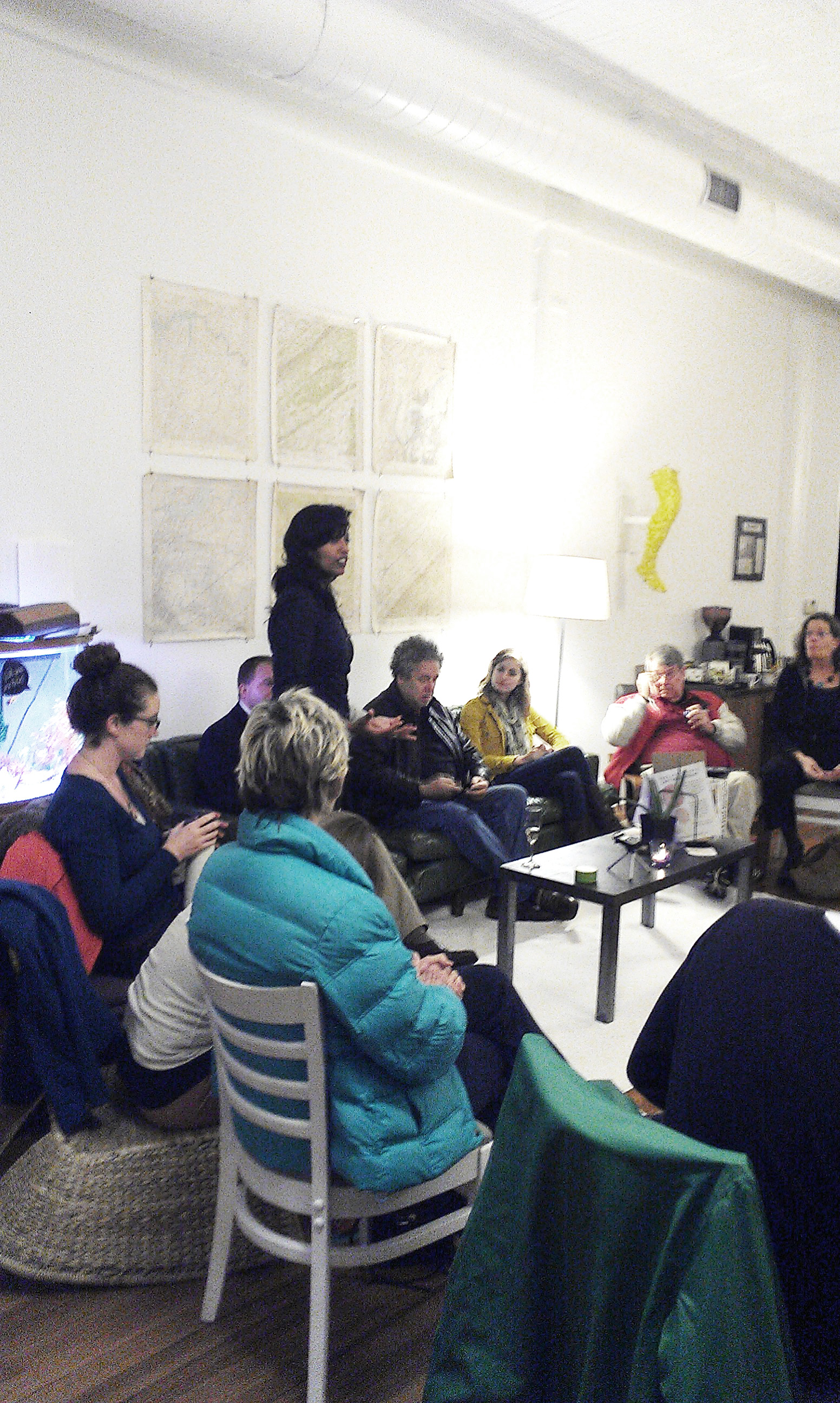 6 years after ‘State of Publishing’ 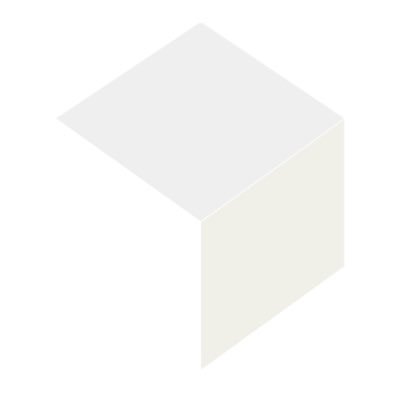