I’m still working on this new one, but I am fondly recalling many light conversations back in high school about making mix tapes. Also, the accompanying quiet moments of happily actually building  them. Small construction projects, each of these. Who remembers? (Gen X, raise your hand? Yeah, me, too.) I’m thinking about how fun that was. To discover music, to share in those ways, to make a mix for someone. Also putting a mix tape together and writing a letter, and sending it off,  in the, like, actual post. And designing the covers for them, collaging them together, placing the A side and B side words together in there, all of it, the package.. those were, um. Pieces. The closest I came to this kind of playful collage-making this year was sending packets of S P A C E mashups to IK and JM. That was fun. That was back when planes were running very infrequently and they told me it would take a month for the envelopes to get from Dalat to London, from Dalat to Seattle. But they did.

Art pieces, kind of like the zines we do these days. Funny, that. I sent most of the ones I used to make to RP, and got many in return. That was a fun exchange over the years of verse and line and drawing, collage and poetry and music, too. I like this kind of dialogue. You get to use different media; those were the days when we just had paper and cassettes and mail that used stamps, instead of emails that go into I-don’t-know-anymore. It’s different, now. So many updates. I don’t know what I think about it. The good news is, you can connect over the internet to so many intriguing people. The bad news is, you never know what you’re going to get when you actually see them in person because internet means a lot of facade-making and tons of superficiality and a dearth of substance, ahem. Yes. I am writing that. Because… you just don’t know. 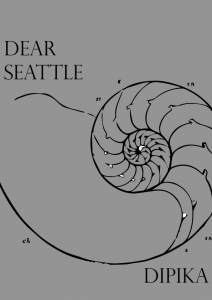 Meantime, revisiting the one from Helsinki: Exit Vantaa… and there were others… The one for Seattle is here…’Dear Seattle’… and there were more, though, I think, in draft… jazzy stuff. That’s what I’m looking for at the moment. I think I need to start a popup jazz cafe-bar. More of a bar. I’m in that kind of a mood, lately.

But yeah. Let’s see if I can find people and make a thing *happen*. Let me see. I’m thinking today of all the great jazz clubs around the world that I’ve been lucky enough to get to have gone to; usually with pen and graph paper in hand. HG had said, ‘You are too much in your notebooks,’ after four or five conversations in which we got to know each other’s works a little bit and he felt comfortable enough saying so. Well! I did take that personally, huh, given the fact that I love my notebooks. But, I think… I think!, I finally understand!, that he was right. I am. I need to go and look and see what’s there. But I am on the right chapter, now. And the right page. To feel. The feelings. Together, in S P A C E-like moments where things just… fall into shape. Let’s see where we go now, next. Maybe downtown. Maybe to the ocean. Maybe nowhere at all. It’s open. Always. That’s the nature of S P A C E.

Hm. Digital archives and so many files. I want to make a compilation of some sort about the journey S P A C E that, from 2017-2020 (and I think this will be my last year since I want to move on to a different project, soon), well, yeah, I want to do all those things and kind of see where it is now, where it’s been, and what it has discovered for itself. Looking. But less adamantly, now. It’s okay if I don’t find the old things, as long as I know how to feel the new ones, on the horizon. Just ahead.

HT RK. Thanks for the call.