Learn our top 6 go-to resources for you to discover how to build your brand, from scratch.

In a short course that will begin on Tuesday, we will share our top 6 modules that have worked well for more than 80 small businesses and organizations whom we have worked for in Seattle, Durham NC, and Phnom Penh. DK has created brand identity designs for small and medium-sized businesses since 2006.

You’ll be able to learn, and apply right away, the lessons from our past experiences by working with these exact six tools to figure out your core story, and how you can best tell it to the world. One of the first gigs we had at Design Kompany was for the rebrand of the Capitol Hill Chamber of Commerce, back in 2006. CHCC, according to this neighborhood website, has since closed.

Akira Morita took the lead for DK on this design, working with me on it, and through that process, discovering as we went, with our clients, what the goal would be for the image-making. In other words, its concept. Concepting well means a lot of talking. About why. And that’s not always easy, especially when a group is just forming.

Being based in Seattle, the ‘how we go about this’ was heavily influenced, naturally, by agile methods. You try, you test, you see, you rework. We started sketching a lot, presenting in pencil, not overworking or over designing, and continuing to develop ideas until something was feeling right—and not just for one or two people, we all know what I’m talking about here, but the collective group. The whole. Timing is everything, sometimes. We were there, in Seattle, after Ireland, at that exact time when the Capitol Hill Chamber of Commerce was just getting started. Just. Like. Us. DK had a new office, a storefront one, and right up the street from us, a few blocks over, in the same neighborhood, was the CHCC.

Our office on E. Olive Way was base for DK for about a year, which was very visible on its streetfront, and, as such, quite easy for people to discover us.

Then we moved to our apartment, and later, up the hill, past 15th, a few blocks down from WET and Fuel. Many en evening would I spend at the Washington Ensemble Theater. Perhaps another indication that one day, I’d be writing mini plays and springing them on people in unexpected cafe, restaurants, eaters, and other people’s literary events. Anyway, after Olive Way and the other place and some other stuff that took place in between, DK shifted to a house by a park with a tennis court and playground.

There, we kept our PLAY going.

The spaces where we most got a kick out of gathering with our clients included… our home offices. Pictured above, is one of them. Progression and playfulness with the ideas… looking back, I see it’s a common thread, with our design works. We want to always leave room for interpretation, so the in-house designers can play with an idea, too, make it a little bit their own, and breathe new life into it, when the time calls for that.

Shifting, poetically but also purposefully. Like any relationship, things change. But how you allow for growth–that’s the key to sticking-with-it-ness. All of that… To say….

The beginning was a fun thing. I remember it.

This design came into being. A concept…

A brand identity scheme, with colors, and this logo…

The year after Akira and I finalized it, handing off the CD with final files (yes, I said ‘CD’), I went by to see how things were going. Smalltalk and the like. They were happy with it. Like many other designs that came after, people were responding. Clients smiled. People enjoyed the connexion. And the image–the connexion-making start point–made it begin to begin. Relationships, after all, have to start from something.

We soon started getting known a little bit around Seattle, I think. Mostly for our ‘clean, modern’ design style (winning new gigs, mostly for architects, after that).

Here are the business cards (photo by Victor Ng): 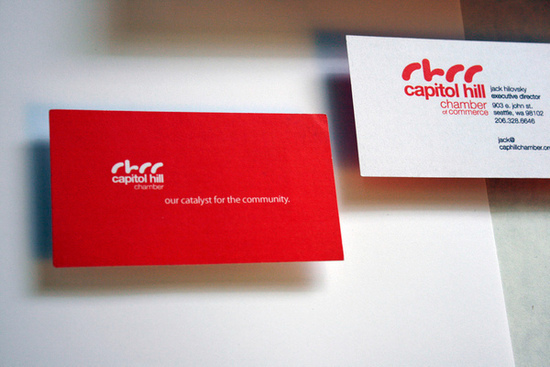 Was… one ending, for a chapter, for us.

On this blog, back in the late 2000s and for some time after, I used to go through and write down all of everything that we did for everyone. A whole bunch of text, yeah, you thought this was long. And pictures.

A bunch of, say, process pictures, or the mood boards we made, even in-progress pictures. I blogged it all.

Reason is, I think, because I value transparency. Showing the process. And encouraging conversation, throughout. Even with people on the sidelines, or just watching, or walking by our office to peek through the window, to say, ‘What’s that?’

Maybe the chance encounter will invite a fascinating insight.

I continue to invite and connect people, to our programs, projects, and real life salons, to this very day, wherever I am. Reflecting. Hm.

Now, I wanted to push the envelope.

The Seattle community paper, Northwest Asian Weekly, is still using our rebrand all this time later. I’m updating our portfolio here to reflect the highlights of our past work in design, and communications, and so, wanted to post about it here.

How we rebranded a 25-year old paper

Everyone. editors, copyeditors, publisher, designers, other staff, occasionally those passing by, and DK worked together to come up with a fresh update, a new template set, typeface selections… the works.

Concepting took a good effort, but it was important, for us, to get the story first. So we sat. And talked. For several sessions, just setting things up so the real talking could begin. In this way, we could do what all designers love to do when they are writing their own creative brief: be present, listen, and make sure you hear everyone. Goal, for DK, then, was to gather inputs from the full team at NWAW.

But it started with the whole big metaphysical question, 25 years after you got started, ‘Who are you now?’

A box over the i, which you can see accented in the design for the masthead, was inspired by the answer we found, together, through dialogues at a round table. Which was, ‘A window to the world.’

Will need to find the better resolution files from our redesign process, but I’m terribly disorganized with old old files, as most people are, and it’s fine, but why I bring this up is because I do recall the file I placed onto the CD of files I had delivered when this project ended, which was, ‘Brand Story: A living document.’ A word file, meant to be something that future editors and designers could visit, and reshape, as time moved on and needs changed. These things happen. It’s inevitable. But a good design leaves space for that… leaves room to grow, and change. To me.

Since I personally love community journalism, I was hawpy to be part of this project, and lead the effort to shift over to a modern, clean design from the original style.

In 2013, When DK got set up in Cambodia, I began to write for the paper, too. I sent in this column, ‘The Village Report,’ to the NWAW. It was easy to think of the idea, given what DK had gathered about what the aim, vision, story, and idea was for the redesign. ‘Window to the world.’ Made sense. It fit. It worked.

Naming, brand identity design, and showing up to make space—quality space—for the process of people who want to discover something new, together, is what we did for NUK Cafe. This was 2014. DK had just opened up our doors in Phnom Penh for business, and this was our first gig.

Since then, five years’ experience of living and learning here in Phnom Penh has given us a chance to flex our creative and intellectual muscles. We’ve gotten into very different kinds of projects, since moving away from typical brand identity design. Still, I think it’s important to share the jo gurney, and how we got to where we are from where we started. This post is part of a series of updates to our portfolio. Discovery, networking, change, and reinvention has led us through a wide set of experiences.

Journeys that, for better or worse, taught us some important lessons. I’ll just leave it at that. It’s a long story.

DK’s now open again for design commissions. That’s a lot of stuff to anticipate, for DK, but the short story is this. We’ve done things, we’ve been places. We’ve learned. We have more to do. Ready, set. See you soon.