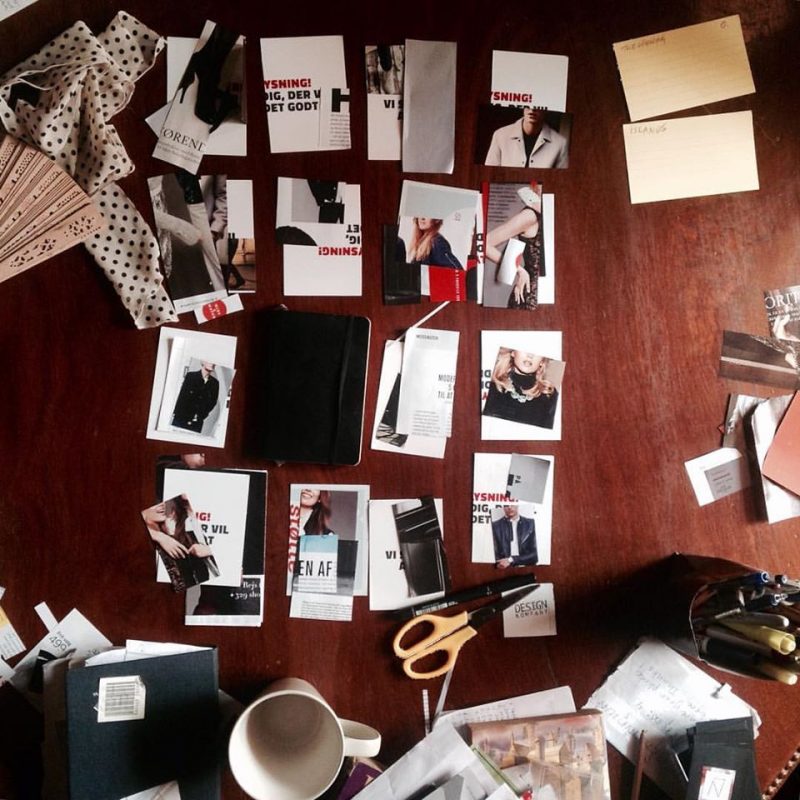 SO TO REMOVE SOME OF THE MYSTERY behind ‘N’, which you may have been invited to in recent days, I wanted to let you in on the story.

Because after one year and a little bit, ‘N’ is becoming clearer.

As clear as a variable can be, that is.

A variable that also happens to have the little arrow above it, indicating it’s a vector.

A vector, recall from geometry, is a point that has a line poking out of it, extending infinitely in that one specific direction. ‘We’re on a particular vector here…’

So when the idea of getting 16 people together who didn’t know one another in a designed, hosted and comfortable space for conversation that’s not boring or predictable came up, the image of sixteen vectors crossing in a point sort of popped out of the chaos of the randomness of that which was around me, at that time, in that particular moment. It started to be clear then that the moment was important for me. Not just when I make my zines and collages and try to go with the feeling, to celebrate the sensation of just improvising on the spot and making it up as I go, but in reality, too. (Reality? Whatever is reality? That’s a philosophical conversation for another time, perhaps in S. P. A. C. E.) But for now, the story of ‘N’.

BRICOLEUR. I LIKE THE IDEA OF HAPPENING upon things. Of finding small bits and pieces around me, and collecting them. Those who know me well know that I am a terrible hoarder of magazines, especially when they are beautifully laid out with lovely typesettings. And typefaces. And general colors, and the paper is nice, and, and… Happening upon the spaces in which I discover these pieces is as much a part of my zinemaking as the materials that collide, somehow, together to become the booklets and studies and once-off collages that for some reason seem to me to do that thing I realize now that ‘N’ also wants to do. Freeze-frame a moment.

A particular coincidental crossing of… people, in the case of the real-life event ‘N’, or in the case of the making of tickets for ‘N’-going guests, the pieces that happen to fall into my space in the just-beforeness of the events.

So it seems natural that the tickets for ‘N’ Phnom Penh were built of magazines I found around the time that was about to happen (April 2015), and that the ones for ‘N’ Bangkok were made of a draft for an eBook I was writing all about that city—some highlighted where errors needed attending to, all of them 8-page minibooklets, and some of them with messages from guests of the first ‘N’, here in Phnom Penh…

Pictured at the top of this page is today’s work: starting to create tickets for the ‘N’ event in Hanoi. Just 16, as always. See 16N >

Making them from bits and pieces I picked up in Denmark.

These tickets will be distributed to guests who’ll be invited to register to ‘N’ in Hanoi.

It’s all very lighthearted, I think, in the approach?

I mean, I’m not sure of how to answer people’s questions that pop up over and over again as I invite guests to ‘N’ salons around the world…

‘Why are you doing this? What’s in it for you?’

Can I punt on that, for now?

I think in my heart of hearts, I just can’t help it. I can’t help doing this because I see that it brings people together for awesome conversations. The kind that aren’t boring, and the kind I just love. I imagine this is what people aim to do when they have receptions for various giant occasions—but it’s small-scale and differently approached. Still, the bringing-together of people for a moment of great dialogue with those whose paths they’d not have crossed, really excites me.

I’VE MADE MORE THAN 400 invitations so far for ‘N’ events in the four cities:

THE GAME. Of the four cities, 2 have seen ‘N’ happen. Sixteen people got tickets, and mutually agreed a date. If that sounds bizarre, it kind of is. But I’m more interested in finding people who say ‘yes’ than those who say ‘when.’ If that makes sense? I’m looking for commitment, and yeah, it’s probably not the easiest thing to say ‘yes’ to, this idea of pre-registering and then deciding a date with someone you’ve never seen or worked with in the past. But you know what? I love the people I am meeting through ‘N.’ Not in an overly intimate, ‘best friends’ kind of way. I mean in a mutually respectful, ‘Yeah, I see you, and I see you saying, what the hey, it’s only a couple of quid and a couple of hours—who knows what might happen?’ way.

I’m looking for the spirit of start, taking a little chance on a thing. Just… a small one. Onceness is the thing. That’s why invitations expire, too.

‘I’M NOT JUST A NUMBER.’ Because did you ever notice how people collect friends, as though we’re numbers? That’s part of why I don’t have a personal FB page, and why I deleted my personal twitter. It’s why I don’t like it when people ask me first thing for my FB, because I’m pretty sure they don’t really care about what I care about and most likely we’ll never have a real conversation online. I guess what I wanted to do was to create an event like ‘N,’ in which 16 variables (16N) represent 16 people, who become real and complex and three-D and have feelings and opinions and can say things in a way that we can never say them online-only. Once. One moment. Of conversation. On a topic that starts with ‘N’. In a city that has an ‘N’ in it. And why 16? Oh, that’s because of 2^8. Clearly.

The framing of the moment is the big work of ‘N’… At least it is, for me…

WHAT HAPPENS NOW. I’m not even going to be able to predict this but that’s okay. I’ve been feeling great about the cool people I’m in conversations with about ‘N’ in London (NOTEWORTHINESS is our theme) and ‘N’ in Copenhagen (NEARNESS). Because I think this is a time when people really do want to connect offline, and in person, and without all that pressure that there is because wow, real life is intense. And often loaded with expectations (let me refrain from spelling these out—I think most of us know what I’m alluding to? and if not, send me a note through our contact page and I can share and we can start a conversation). Because quality comes when we can see each other, hear each other, and feel like we’re being seen and being heard.

So that’s what I task myself to do at each ‘N’. Allow everyone space. To feel included. Seen, and heard. It’s a big month, this one, for me and for invitation-making for ‘N’ events in London, Copenhagen and soon, Hanoi. As soon as I get these things glued together and finish each ticket with an ‘N’ vector insignia… Soon.

Trusting the process. Looking for whomever might become my guests for ’16N.’ Curious? Go here.

GUESTS. Did you attend an ‘N’? How did you receive it? Does this stuff resonate with you? I’m still ruminating, but I’d love to hear your thoughts. If you’ve been invited, well, feel free to ask me anything. Except, um, ‘The exact date is when?.’ I’m working on that, in a poll, with registered guests, right now. To be continued! —AS 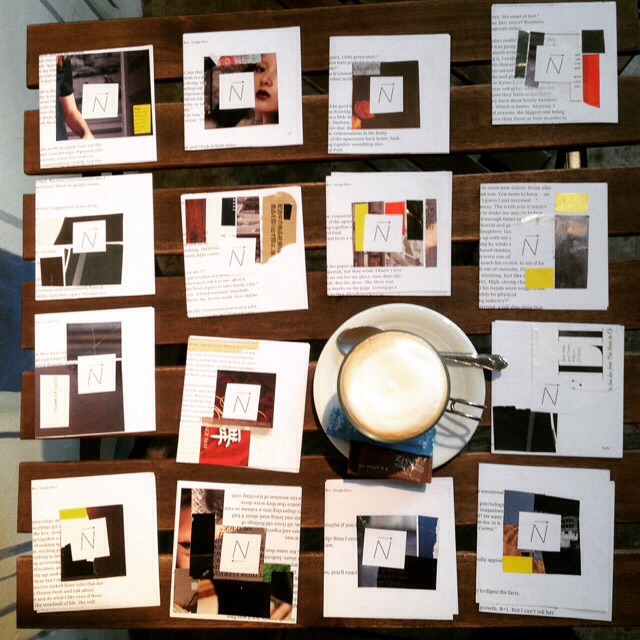 Designing the next ‘N,’ a 16-way conversation installation 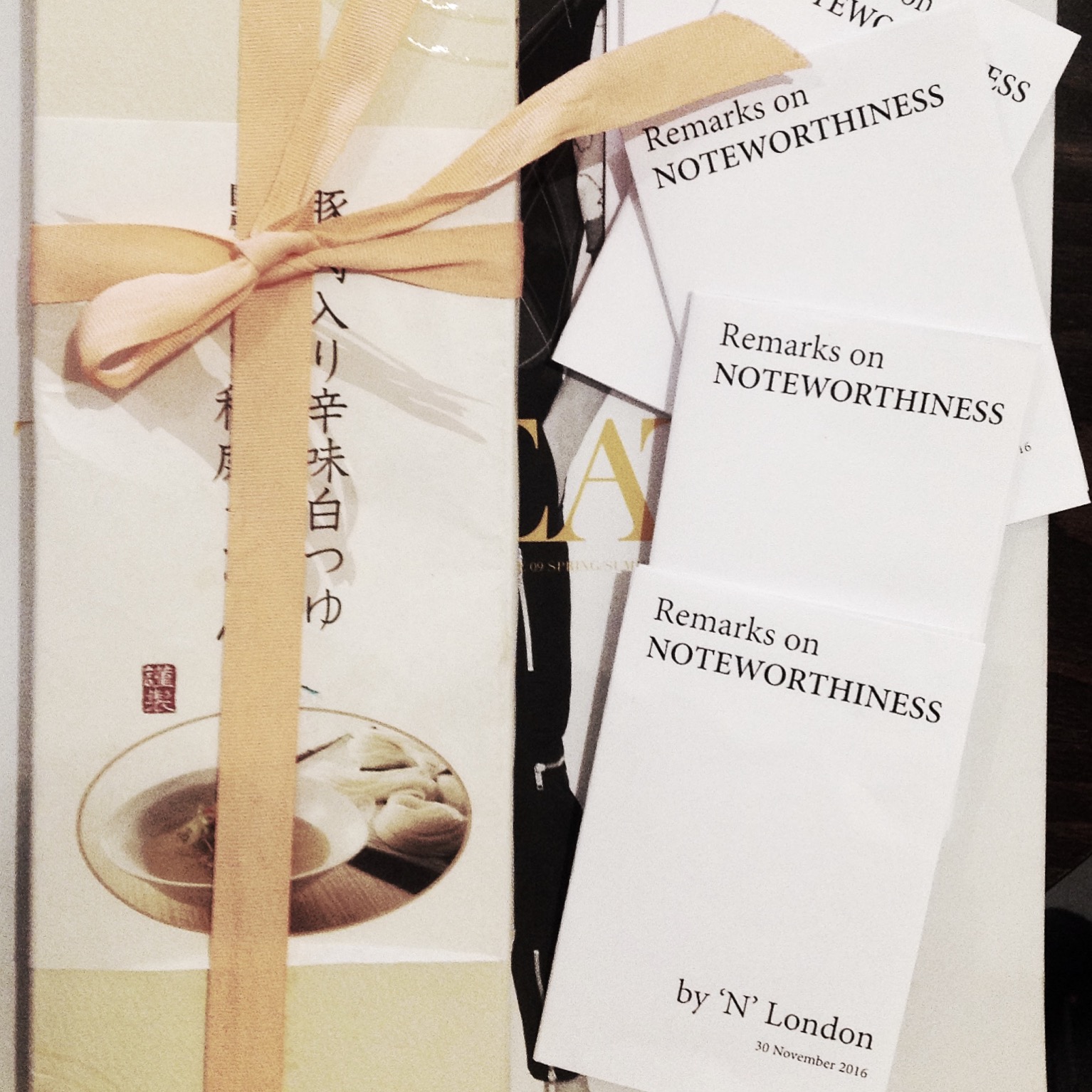 Protected: On the nature of Noteworthiness